Since January, new regulations in California now require all residents and businesses in the state to separate food and other organic materials from the rest of their garbage to reduce organic waste in landfills. The new law is seen as groundbreaking, a milestone in the fight against climate change by reducing greenhouse gas emissions, producing fuel and creating compost that can help sequester carbon in soils.

But compost advocates say the law could make it difficult for farmers to access so-called ‘brown gold’ on a large scale, thwarting efforts to increase adoption of environmentally friendly agriculture. weather. The regulations do not require newly generated compost to be used on farmland, include funding for expensive transportation to farms, or require compost to be of a quality that would make it attractive to farmers. farmers and herders. And because each municipality must decide how to implement the rules, there is no one-size-fits-all approach that could lead to an increase in on-farm compost applications.

“Everyone looks to California as a hopeful example. It’s a huge win to get food scraps and green waste out of landfills,” said Anthony Myint, executive director of Zero Foodprint, a nonprofit that distributes grants for sustainable farming practices. “But the regulation could also create a challenge for farmers.”

California generates 23 million tons of organic waste each year, including 5 to 6 million tons of food waste, according to CalRecycle, the state agency overseeing the new regulations. As it decomposes in landfills, organic waste emits methane, a powerful greenhouse gas whose impact on global warming is 25 times greater than carbon dioxide. Organic waste is the third largest source of methane emissions in the United States

Senate Bill 1383, which was signed into law in 2016, aimed to reduce the level of organic waste sent to landfills by 50% by 2020 and 75% by 2025, though the state has acknowledged that it had not met the 2020 target. Newly diverted organic waste will be turned into compost, mulch and energy via biomass combustion. But the state says compost will make up the bulk of the new material since California produces limited amounts of biogas and compressed recycled natural gas (CNG).

“It’s a huge win to get food scraps and green waste out of landfills. But the regulation could also create a challenge for farmers.

Compost, long used by organic growers and home gardeners, has become popular in recent years among mainstream farmers interested in regenerative agriculture. Several studies have shown that spreading a layer of compost on farmland and ranches can lead to increased carbon storage, especially if the compost is combined with cover crops. Compost also increases the water holding capacity of soils. And while using compost in urban landscapes, including parks and schoolyards, can improve soil health, applying compost to farmland has multiple co-benefits, experts say. , including increasing the nutrient content of food, increasing crop yields, helping the soil to absorb and retain more water. (which reduces irrigation costs) and reduces the need for expensive synthetic fertilizers and pesticides.

CalRecycle estimates that approximately 5.5 million additional tons of compost should be produced in California by 2025, enough to apply to an additional 27 million acres or up to 4% of the total cropland in the State. Increasing compost production through the diversion of organic waste is part of California’s efforts to sequester carbon and reduce greenhouse gas emissions, including improving soil health through “cultivation carbon”. Nearly three-quarters of agricultural projects that have received grants from the state’s Healthy Soil Incentive Program include compost applications. But the number of projects funded — about 600 so far — is small compared to the huge number of farms in California. Experts say expanding access to compost could help more farmers reduce emissions and put them on track to adopt other sustainable practices.

A Norcal Waste Systems truck drops off a load of compostable materials at a transfer station in San Francisco, California. (Photo by Justin Sullivan/Getty Images)

“We have an impulse to try to build bridges between compost producers, generators and farmers. Getting compost to farmland is a critical part of closing the loop,” said Neil Edgar, executive director of the California Compost Coalition, a statewide advocacy group.

Some Northern California cities, like San Francisco, have had food waste diversion programs in place for years and already have strong compost markets and relationships with local composting companies. But many other cities and counties, especially in the southern part of the state, where most residents live, are scrambling to adjust to the new law. While some existing waste treatment facilities will expand, several dozen more facilities have yet to be licensed and built around the state. Meanwhile, fines for failing to separate food and other organic waste from garbage destined for landfill are set to come into force in 2024.

The new regulations also require cities and counties to purchase a certain amount of compost and other products made from recycled organic waste each year, based on the size of the jurisdiction’s population, and either use it or give free to residents. Localities can source and distribute the products anywhere in the state. But the regulations do not specify who should receive the compost, where, or how to pay the transport and spreading costs.

Will farmers get more compost?

About half of what California composters currently produce is compost, and they sell 65% of their compost to the agricultural industry, according to a report commissioned by CalRecycle. The market is tight, with agricultural-grade compost in high demand, especially in areas with access to composting facilities, transportation and land-spreading services, said University of California research associate Cole Smith.

Yet for many other farmers, the cost of compost — and the cost of transporting and spreading it, which often doubles the price to farmers — is prohibitive, Smith said. While some small and medium-sized farms use it, their budgets don’t allow them to do it every year, at the interval that would be optimal for their soil and the environment. When money is tight, Smith said, compost applications are among the first practices to adopt. Growers of high-value fruits, vegetables and cannabis tend to rely more on compost, Smith said, because they can afford it.

“Yes, we want to eliminate organic waste from landfills and reduce emissions from landfills. But the producers. . . think you want to use their fields as a layout [site].”

But the biggest challenges by far are contamination and convincing farmers to use compost in the first place, Smith said. Many will use it from agricultural waste from the farm, but avoid urban-generated compost. The mistrust is partly tied to California’s history of direct applications of green waste to farmland without composting, Smith said. Likewise, it echoes a decade-old controversy over a San Francisco program that aimed to turn human waste into garden compost. Mistrust is also a direct result of farmers receiving heavily contaminated batches of compost.

“Yes, we want to eliminate organic waste from landfills and reduce emissions from landfills. But when growers hear this, they think it hit the plate, then the trash, and now you want to use their fields as disposal [site]”Smith said.

“The compost we received contained a lot of foreign matter. . . there was glass, plastic, forks and bits of non-carbon material that we ended up spreading across our fields,” Muller said. “We were concerned about microplastics and also about the safe handling of our crew if small pieces of glass were spilled.”

Muller also said that with compost quality poorly defined in the state, the material was often “pretty raw,” meaning it had to decompose in the fields. 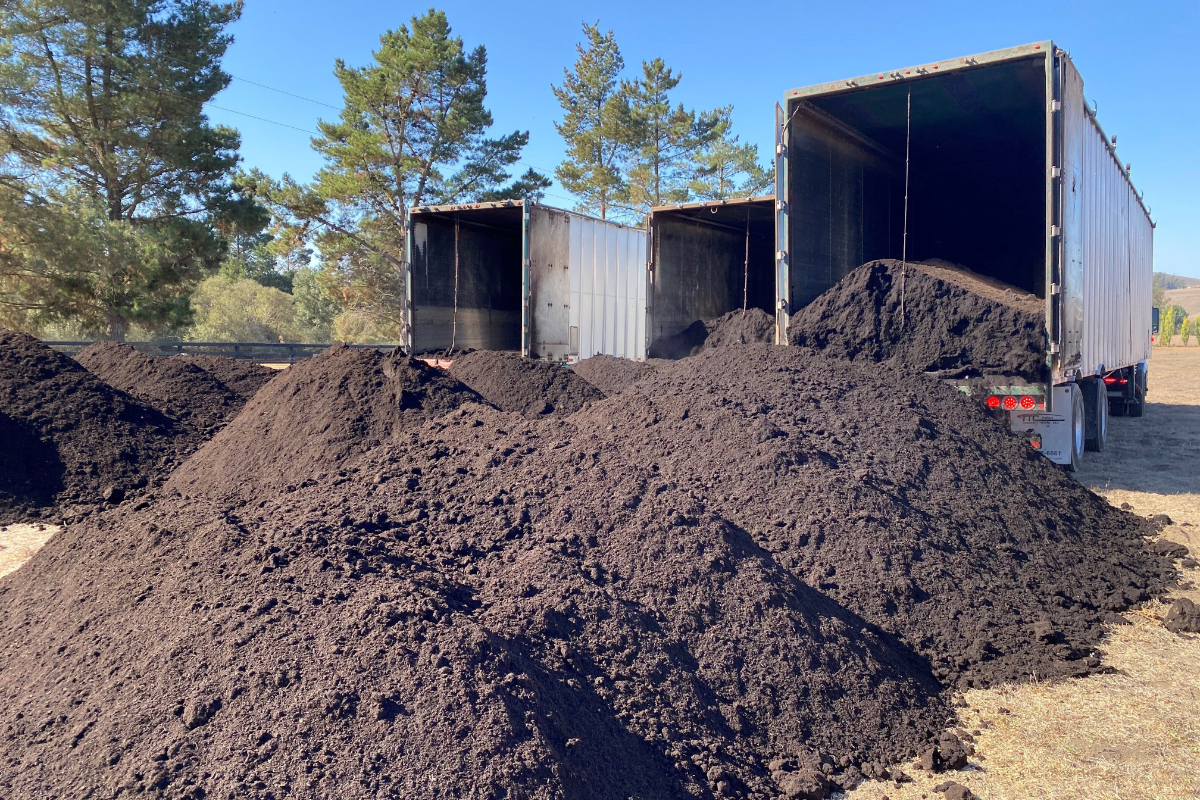 Smith worked to build trust and communication between composting facilities and growers. Part of this work involves teaching farmers how to assess the quality of compost before it is delivered or spread on fields. Smith also works with Edgar of the California Compost Coalition to conduct workshops for farmers on how compost can improve soil, increase productivity and help meet state climate goals. The two are hoping for more funding to continue educating farmers across the state. But all of those efforts, Smith said, depend on local governments teaching their residents how to effectively sort their trash.